I just saw that my game unstoppaball is a finalist for the Unity-Awards 2011 in the student-category.

This is great. I’m going up against some fun high-quality-titles. Let’s see how this will turns out :-).

Read the announcement on Gamasutra.

Now that the euphoria of not sleeping and game-developing has settled down, let’s take a look at what went right and what went wrong during the development of Metal Sphere Solid.

Well actually, everything went pretty alright. There isn’t much that went “completely wrong”. Ah well, I’ll talk about it anyway.

The theme – Because “escape” is such a non-theme. You can put virtually everything in it. In that regard it is even worse than “it’s dangerous to go alone.”

The color-scheme – The main charater needs to contrast with the environment he’s in too create tension. If the main character just blends in, he’s not in jeopardy, he’s at home. So I was a little miffed when I figured out with 12 hours to go that the environment was mostly blue, and I didn’t want to create a red ball again.

I went for a glowy green (which I nailed this time), which nicely contrast with the level. The color-combination is still a bit weird.

Tile-based level – Having everything in clean tiles made putting this together much easier. This further creates a nice little gag when you leave the tile-set at the end.

The Story – This is the largest amount of story I ever put in a game. Until now I’ve worked under the premise that good games-design has to be the basis, while story is optional. That still holds true, but now I see how an engaging story can pull you into the game.

The end – I love it. Too bad I couldn’t extend it a bit. First you see your friends, an assortment of balls similar to you, but with different colors, core-structures and sizes. You free them, they say a random, possibly funny line, and roll to freedom. You join them, and while joining them leave the rigid, tile-based confines of the main level and enter a free terrain.

I need to expand upon the “friendly ball”-theme more. It’s fun.

The ball-design – Compared to one of my previous games, Unstoppaball, the ball-design is much better. The glowing core is warmer, the outging light shows the strength of the character, and the brightness contrasts nicely witht he relatively dark surrounding.

The Soundtrack – I experimented with my guitar until I found something that was both interesting and fitting to the gameplay. So far it is only good, but nothing special. Also, the loop is off by half-a-second. Need to remember that next time.

What I would have liked to add/improve

Better character-fragments – So far the “remains” of the hero or the enemies are just four to five relatively uniform fragments. With more time I could have created something more complex and organic.

Better score – The score that is now measured is the time you spend being seen. The highscore-list is reversed, which means that people with the least amounts go on top places. This is far from optimal, as there is a “finite” highscore, and after attaining it doesn’t create an incentive to keep playing.

More complex enemies – The original plan of having patrolling enemies fell through due to time-contraints, but I still managed to make something interesting with only stationary guards.

Well, pretty much every aspect came out positive – The game is emotionally engaging, throwing enemies in spikes is fun, the sneaking mechanic is relatively rare, so far I’ve gotten a pretty good amount of votes, critiques are positive, and a good number of people have played it.

Also, I got a review. Which is always nice.

I call this a success. Now let’s see how you will judge this :-).

Last weekend was once again the Ludum-Dare-competition, during which I made this game in just under 2 days.

You are a Sphere, taken prisoner by the evil Cuboids. Try to escape. Avoid enemies. Avoid being seen. Be sneaky. Be stealthy. Escape!

There are coming along nicely (except for the generous cutting needed and copius amounts of ink used), so I’ll have a good batch ready for GamesCom.

I love the design. They are bigger than usual cards, made with heavy paper, and printed on both sides. The pictures are from games I made (unstoppaball, Dirt Driller, etc).

So I finally gave in and went to see what all the fuss with browsergames is about. I chose Farmville for Facebook, thinking that going for the ur-game would be more insightful than to one of the other “Placeholder-Ville”-offshoots. I played it for several weeks, and here are my thoughts (in bulletpoint-form): 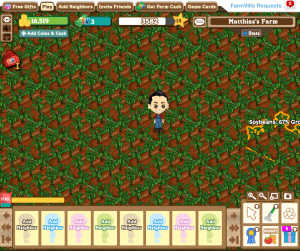 I guess this is probably a metaphor for something.

Well, these are my points about Farmville (and all other games that follow the formula, I guess). I can see how many people would find them interesting, but frankly, I outgrew them a long time ago. I already can control my impulses, and don’t feel any loyalty towards my virtual assembly of non-existent stuff.

Also, Farmville didn’t really try to respect me, with all the “give me your money”, “recruit your friend to give me money” and “you have to pay money to see all the cool stuff”-spam.

As a producer, I can see how this brings in revenue. As an experienced gamer, I can only look at League of Legends or Team Fortress 2, where you never have the feeling you have to pay to enjoy the game.